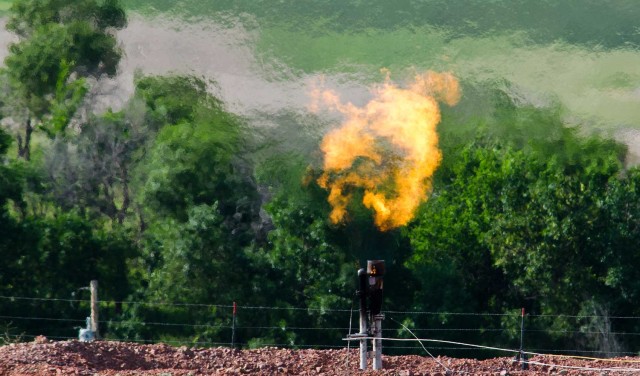 It is eerie in Porter Ranch. It feels like an uber-rich Mayberry, if the Mayberry gas utility started leaking massive quantities of methane and forced everyone to evacuate. In the hills above gated communities — including Porter Ranch, which is on par with Bel-Air for Los Angeles County income supremacy — there are trails and one-lane roads that swoop and cavort the mounts covered in oil and gas sites, many of them decades old.

Down below in the streets of Porter Ranch, people are trying to return their lives to normal. You see them on mountain bikes and running trails, but it’s eerie still. More than 4,000 homeowners have yet to return. And just knowing that their absence is due to a massive natural gas leak makes you wonder if the cool steady breeze is carrying something just dying to give you a nosebleed or lung troubles.

If you squint, Porter Ranch looks a lot like parts of Colorado. In fact, for now, part of Porter Ranch is Colorado. A good portion of the contamination that has thrown this community onto the front pages of newspapers all around the world was pulled out of the ground in Colorado, transported via pipeline or rail to Southern California, stored in the Aliso Canyon storage facility in Porter Ranch where it then escaped into the atmosphere from an old well, saturating the air in the neighborhood and comprising the worst methane leak in U.S. history.

Yes, Colorado’s role in the Porter Ranch methane leak is integral. The methane from our natural gas that leaked in California is what forced the evacuation and relocation of thousands of families. What it shows is that no matter how strict the regulations Colorado puts on its oil and gas activities, the safety of the hydrocarbons we pull from our ground is often determined by other states and federal agencies. If Porter Ranch is to be seen as an example, the system is fraught with poor and inconsistent oversight policies. The infrastructure in place to transport and store oil and gas is weak at best — a recent Harvard study found the U.S. is the worst emitter of methane in the world. And by extension, Colorado as a major natural gas producer and distributor is one of the largest culprits when it comes to allowing methane to escape into the atmosphere. Research has found that the gas fields of the Four Corners area leak as much as 10 percent of their entire production every day. And as Porter Ranch made perfectly clear, large quantities of Colorado’s natural gas are escaping after the gas leaves the state.

Even when well and storage sites are abandoned across the country, new research indicates these old wells still leak massive quantities of methane and other harmful chemicals. And this major source of greenhouse gasses is mostly unregulated and unseen.